Today we will talk about a very interesting project, and we will interview the developer of Symbol Node List, as well as find out some updates. The information will be enough to study, so SymbolTimes has prepared for you exclusive content.

Symbol Node List – is an information table for Symbol nodes, which displays information such as the “importance” of the nodes, the number of staking on the nodes, the expiration date of SSL certificates, and also displays the server version and bootstrap version. In fact, these are just some of the features of this site that we have listed, so let’s find out about other features of this site as well.

Interesting features to look out for if you’re mining (harvesting) in the Symbol ecosystem.

This feature allows you to track detailed statistics on the addition or reduction of Symbol nodes, which, in our opinion, allows you to visually see the total number of all nodes, as well as the number of harvesters in the Symbol ecosystem. Therefore, if you did not know about such a feature, we recommend that you follow it on the Symbol Node List website.

This feature allows you to see the estimated amount of expected harvesting. If we consider an example from the Symbol Node List site, if you have, for example, 100 thousand XYM, then you will receive approximately 3 blocks per month. It should also be understood that these statistics are for informational purposes only.

By the way, there is another way to calculate harvesting, this is through the calculator website 4xym.de.

This list allows you to see the most active members of the community who are tweeting about Symbol. To be included in this list, you must tweet with the hashtag #Symbol and if you get enough likes, you will be visible in this list. In our opinion, this is a very cool feature. 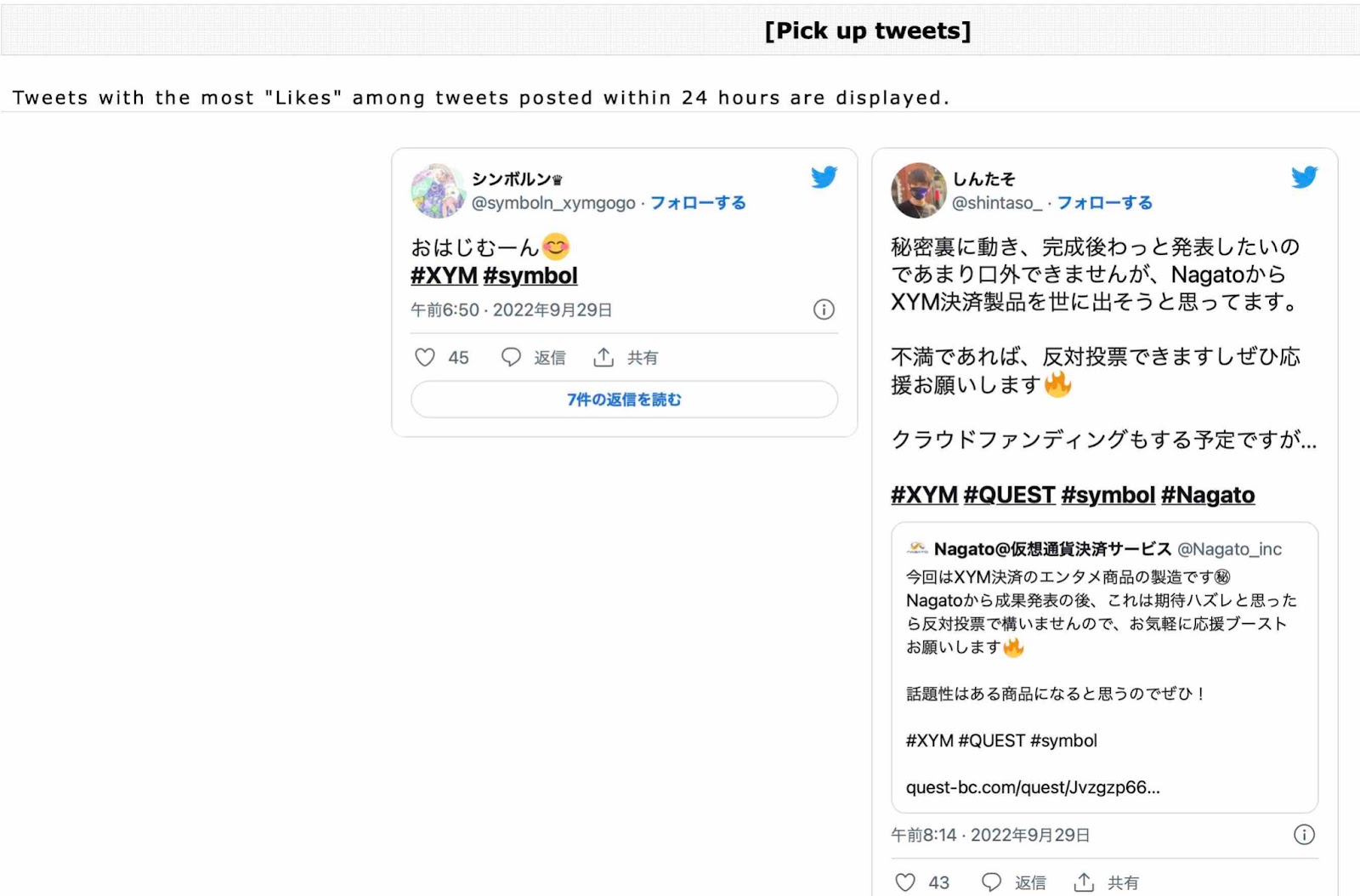 However, if you have less than 2,000 followers, then your tweets will appear in a different section👇 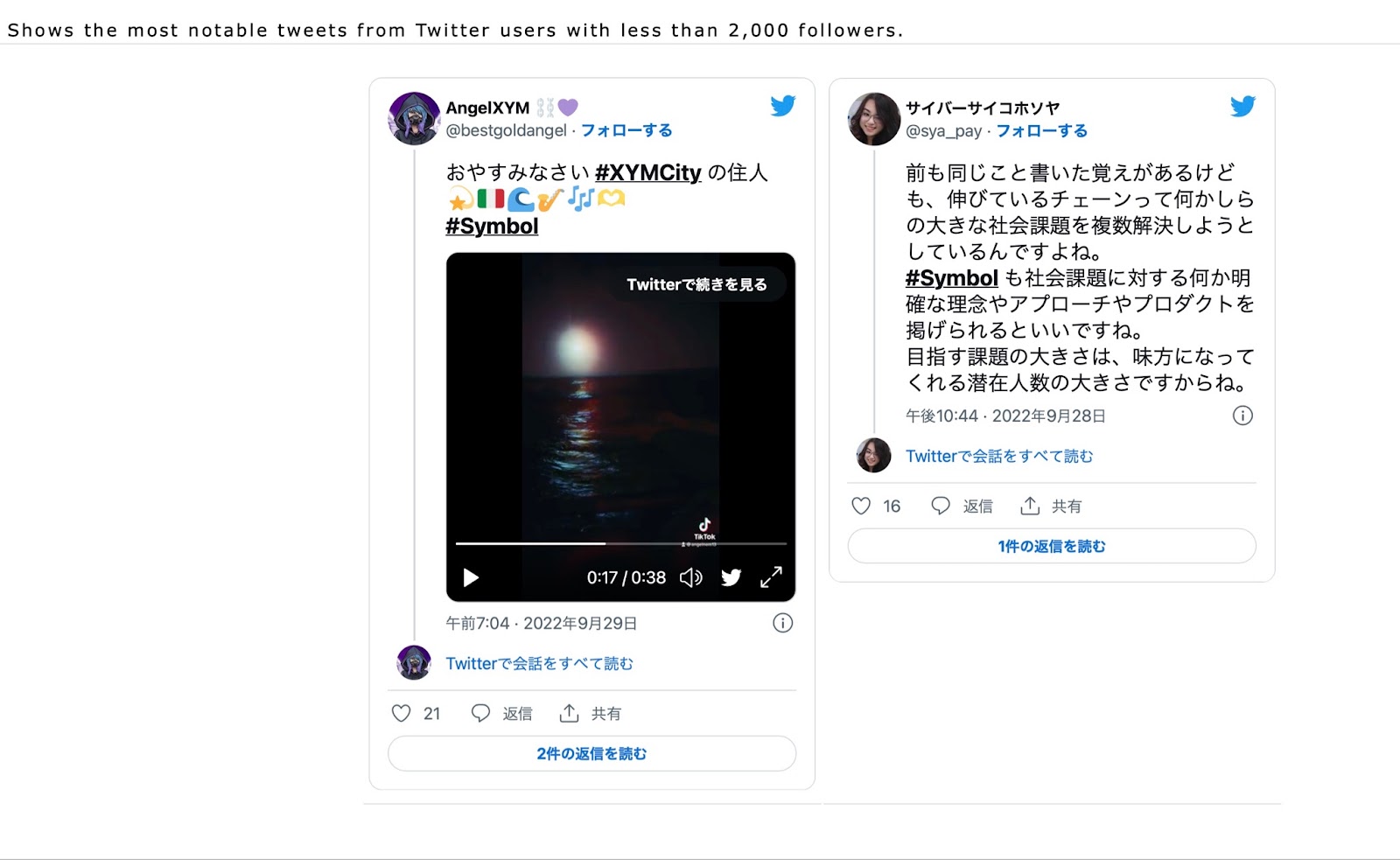 We hope you enjoyed the features we wrote about above and hope they help you when mining (harvesting) XYM.

In addition, we would like to say the following:

The Symbol Node List service has many features and is a kind of billboard for the Symbol project, making it a very powerful and valuable tool for the NEM/Symbol community.

Scrolling through the feed on Twitter, we came across an interesting news:

It turns out that it was recently discovered that 5% of all Symbol nodes were down for several hours, as a system failure occurred on the Contabo server.

Leon (NEM/Symbol CM) also expressed his opinion about centralization, how much it can harm the blockchain network. You can read his twitter thread here. 👇

Leon is a supporter of decentralization, he believes that: “owning a Symbol node at home is much better for the network and decentralization.” It should be noted that this has its pros and cons. So read Leon twitter thread, it’s quite interesting and informative.

We would like to note that the cryptoBeliever user has a similar service that allows you to create a harvesting report in csv format, this service can be viewed 👉 here

We are really looking forward to this service from Ahiki, it’s great that such services are being created. You can read more about this service below.

SymbolTimes: Can you please tell us how you came up with the idea to create Symbol-Tools for tracking delegates? Also, why did you name your project Symbol Node List?

SymbolTimes: Are you planning to make the same site (project), but for NEM nodes?

Ahiki: I have already created half of the project, for NEM nodes, but I don’t know yet when it will be launched. During the NEM hard fork in November 2021, information about updating the version of the nodes was required. At the time, the “Symbol Node List”, which links node operators to owners via Twitter, was very useful as some node owners were unaware of the hard fork. Therefore, for the future, I think that a similar tool should be created for NEM.

The Symbol specification and API are currently very different, so a certain amount of development and maintenance time is required. I plan to start development when I feel that I can count on profitability.

SymbolTimes: Tell us about the most interesting features of the Symbol Node List (implemented features)?

Ahiki: As a main feature, the ability to easily check the importance of each node and delegate is undoubtedly the biggest advantage of the “Symbol Node List”.

Also in the “Symbol Node List” there is an opportunity to link the owners of Symbol nodes with their Twitter accounts, by the way, this function “Active Twitter Users” was described at the beginning of the article.

Therefore, I believe that the increase in features in the “Symbol Node List” should help expand the Symbol community.

SymbolTimes: What are you currently working on in the Symbol Node List? What awaits us in the near future? What updates are you planning?

Ahiki: Lots of feature requests. As of September 27, 2022, we are developing a version of the Symbol Node List for Google Sheets. Harvesting information is often managed by individuals using MS Excel or spreadsheets. Spreadsheets make it easier for people to gather information in specific settings, so I think that would be more convenient. (But I’m concerned about the decrease in hits to the “Symbol Node List” site.)

We think we can increase the amount of tools for the Symbol Node List, and use that as an advertising platform for Symbol. I would like to share information about this later on my twitter.

SymbolTimes: If possible, tell us a little about yourself, and also how many people are working on the Symbol Node List project?

Ahiki: I work alone, but we’re constantly getting requests for improvements and suggestions from everyone in the community as needed, and in that sense, we’re working together with everyone.

SymbolTimes: How do you see the future of Symbol? What inspires you when working with Symbol?

Ahiki: I would be happy if I could contribute to the expansion of the economic zone with Symbol.

I have developed various applications and tools but have yet to see such amazing response and admiration as I have in the Symbol community as I get a lot of likes and comments on my Twitter.

SymbolTimes: Is there anything you would like to say (your thoughts) to the NEM/Symbol community?

Ahiki: The price of all crypto assets is low, but I hope that everyone will work hard at their own pace in order to increase the value in the future.

I believe that the goals that everyone in the community is striving towards are moving in the same direction, so I count on your continued support.

Ahiki: Ever since I was a child, I have loved making things (including handicrafts).

When I was in high school, I was impressed by the fact that with just one computer, I could create various tools and websites.

SymbolTimes: Please tell us about your hobbies/interests? How do you relax from work?

Ahiki: In short, it’s all about programming. I am happy when I do what I love.

In addition, I have the character to do everything carefully. Lately I’ve been into hiking and fishing. About two years ago I got my sailing license, so several times a year I go out to sea and fish.

Ahiki: In fact, I like different kinds of food. But I choose what goes well with alcohol. (Everything is delicious, and I always say “Delicious” when I drink.)

Maybe that’s why my hobby is fishing, because I like to eat fish, so there are always a lot of fish on the table.

Thank you very much for reading our article to the end, we hope you enjoyed this content. Join our discord 👉 SymbolTimes

We welcome any donation: